When we think of data science, we often think of statistical analysis of numbers. But, more and more frequently, organizations generate a lot of unstructured text data that can be quantified and analyzed. A few examples are social network comments, product reviews, emails, interview transcripts.

For analyzing text, data scientists often use Natural Language Processing (NLP). In this blog post we’ll 3 we’ll walk through 3 common NLP tasks and look at how they can be used together to analyze text. The three tasks we’ll cover are:

We’re going use the spaCy python library to apply these three tools together to discover who the major actors are in the Bible and what actions they take. From there, we’ll see if we can make an interesting visualization with this structured data.

This approach can be applied to any problem where you have a large collection of text documents and you want to understand who the major entities are, where they appear in the document, and what they’re doing. For example, DocumentCloud uses a similar approach to this with their “View Entities” analysis option.

One way to extract meaning from text is to analyze individual words. The processes of breaking up a text into words is called tokenization – the resulting words are referred to as tokens. Punctuation marks are also tokens. Each token in a sentence has several attributes we can use for analysis. The part of speech of a word is one example: nouns are a person, place, or thing; verbs are actions or occurrences; adjectives are words that describe nouns. Using these attributes, it’s straightforward to create a summary of a piece of text by counting the most common nouns, verbs, and adjectives.

Using spaCy, we can tokenize a piece of text and access the part of speech attribute for each token. As an example application, we’ll tokenize the previous paragraph and count the most common nouns with the code below. We’ll also lemmatize the tokens, which gives the root form a word to help us standardize across forms of a word.

Dependency parsing is a way to understand these relationships between words in a sentence. While both Jill and John are nouns in the sentence “Jill laughed at John,” Jill is the subject who is doing the laughing and John is the object being laughed at. Dependency relations are a more fine-grained attribute available to understand the words through their relationships in a sentence.

These relationships between words can get complicated, depending on how a sentences are structured. The result of dependency parsing a sentence is a tree data structure, with the verb as the root.

Let’s view a dependency parse of “The quick brown fox jumps over the lazy dog.”

As a lead into our analysis, we care about any tokens with an nobj relation, indicating that they’re the object in the sentence. In the example sentence, this would mean we want to capture the word “fox”.

Finally there’s named entity recognition. Named Entities are the proper nouns of sentences. Computers have gotten pretty good at figuring out if they’re in a sentence and also classifying what type of entity they are.

spaCy handles Named Entity Recognition at the document level, since the name of an entity can span several tokens. An individual token is labeled as part of an entity using an IOB scheme to flag the beginning, inside, and outside of an entity.

In the code below, we’ll print all the named entities at the document level using doc.ents. Then, we’ll print each token, its IOB annotation, its entity type (if it’s part of an entity).

The example sentence we’ll use is “Jill laughed at John Johnson.”

Each method mentioned above is pretty great on their own, but the real power of natural language processing comes when we combined these methods to extract information that follows linguistic patterns. We can use part of speech tagging, dependency parsing, and named entity recognition to understand all the actors and their actions within a large body of text. The Bible is a great example to apply these methods due to its length and broad cast of characters.

The data we’re importing contains one object per Bible verse. Verses are used as an reference scheme for parts of the Bible, and usually contains one or more sentences of text. We’re going to go through each verse and extract the subject, identify if it’s a person, and pull out the action that person does.

First let’s load up the Bible as JSON from a GitHub repository. Then, we’ll pull out the text from each verse, send the text through spaCy to do the dependency parsing and tagging, and store the resulting documents.

We’ve parsed the text from the json into verse_docs in a little over 3 minutes, about 160 verses a second. For reference, here’s what the first 3 rows of bible_json look like:

In order to extract the actors and actions, we’re going to iterate through all of the tokens in a verse and consider 3 factors: 1. Is the token the subject of the sentence (is it’s dependency relation nsubj?) 2. Is the parent of the token a verb? (This should usually be true, but there are sometimes conflicts between the POS tagger and dependency parsing, and we’ll play it safe. Also, I’m not a linguist so there may be some other weird edge cases) 3. Is the token a named entity that’s a person? We don’t want to extract any nouns that aren’t people. (For simplicity, we’re only going to extract first names)

If our token meets the above three conditions, we’re going to collect the following attributes: 1. The text of the noun/entity Token 2. The Span (phrase) that includes the noun and verb 3. The verb 4. The log probability of the verb occurring in standard English text (using log here because these probabilities are very small) 5. The verse number

We’ve got a list of all the actors and their actions that we’ve extracted. For a quick analysis, let’s do two things:

Let’s take a look at the top 15 actors by verb counts and their most common verb.

Looks like a lot of people said things in the Bible, with the exception of Solomon who made a lot of things.

And what were the most unique verbs, as measured by their probability of occurence? (We’ll drop duplicates here so each word is unique)

Looks like we’ve got some interesting new words to learn! My favorites are discomfited and ravin.

Let’s visualize our results next. We’re going to take the top 50 names with the most actions and plot which verse those actions occur in the whole text. We’ll also draw vertical lines where each book of the Bible starts. The names will be sorted in order of first appearance.

This should give us an idea at which point in the Bible each of these characters were the most active.

We’ll add in some separators to separate different sections of the Bible. Not being a Biblical scholar myself, I used the divisions from here, which are as follows:

In addition, we’ll separate the Old Testament from the New Testament with a red indicator line. 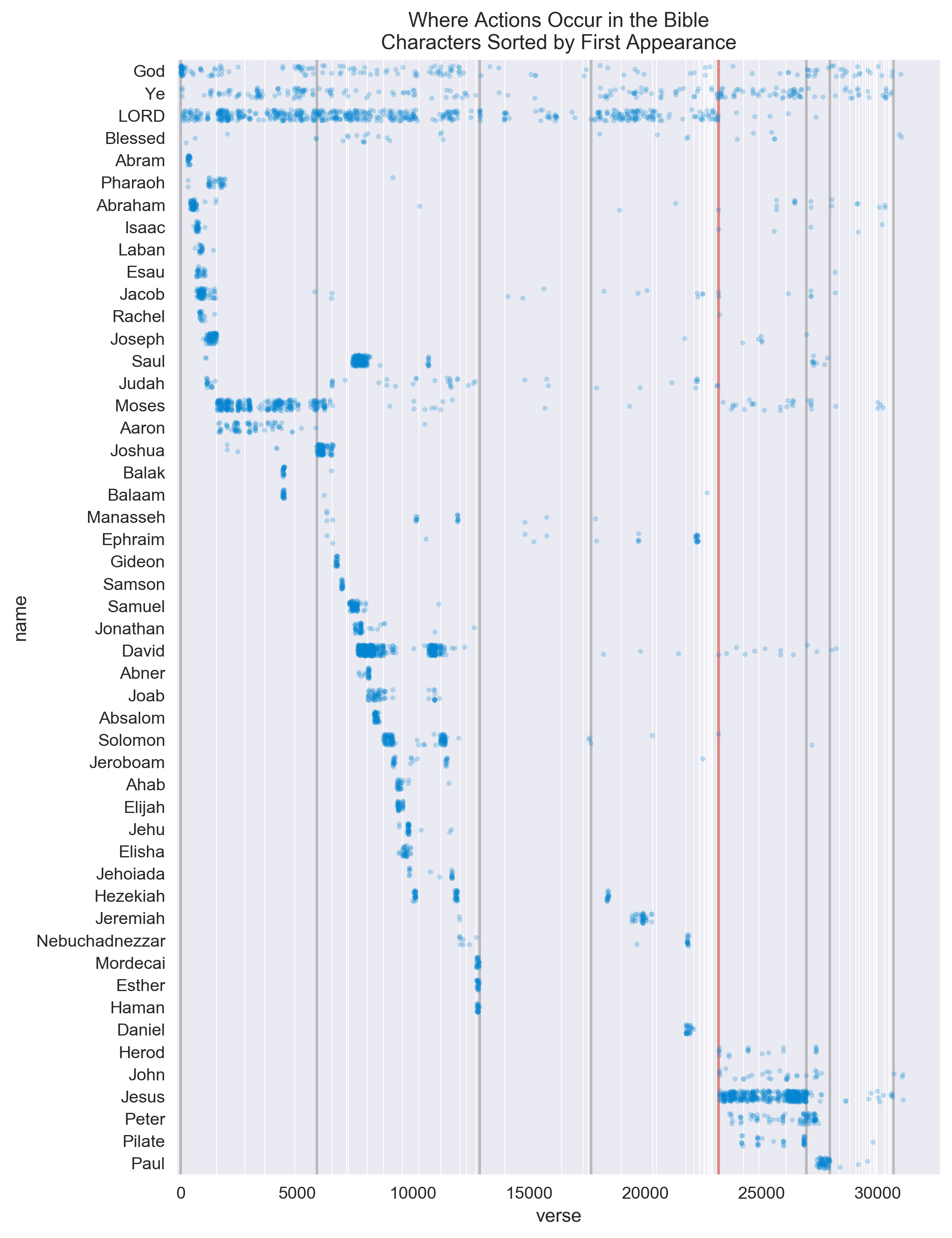 Issues with this Approach

As always, there are ways to extend and improve this analysis. Here’s a few I’ve thought of while writing this: 1. Find relationships between entities using dependency relations and understand the characters through a network analysis approach. 2. Improve the entity extraction to capture entities beyond single names 3. Do an analysis of non-person entities and their linguistic relations - which locations are mentioned throughout the Bible?

We can get pretty far doing some interesting analysis by only using token-level attributes from text! In this blog post, we covered three key NLP tools:

We applied these three tools together to discover who the major actors are in the Bible and what actions they take. We plotted those actors and actions to understand where each actor had their major actions.

Thanks to Vicki Boykis and Austin Rochford for providing feedback on earlier versions of this post.